Article by Dr. Chris Impey titled "What Buddhism and science can teach each other – and us – about the universe"(The Conversation, June 16, 2020)

https://theconversation.com/what-buddhism-and-science-can-teach-each-other-and-us-about-the-universe-134322
Posted by Eric Chudler at 9:54 AM No comments:

Looks like the program has a new name: "Science for Monks & Nuns."

Posted by Eric Chudler at 3:38 PM No comments:

An interesting article written by Louie Lazar titled "Tibet Is Going Crazy for Hoops" (January/February 2019 issue of The Atlantic magazine) about basketball in Tibet.

Posted by Eric Chudler at 3:42 PM No comments:

Over the past eight years, I have traveled to India seven times to teach neuroscience to different groups of Tibetan Buddhist monastics.  These trips are always a bit different with unique challenges and opportunities.  Here is a list of these trips and a map where each workshop was held. 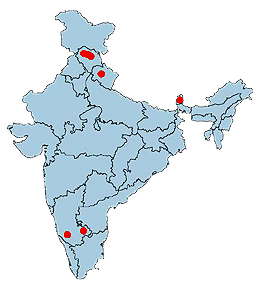 Posted by Eric Chudler at 12:52 PM No comments:

It has been three days since returning from Gangtok.  Jet lag has not been too much of a problem:  I have been able to sleep 6-7 hours at night, but I do go to sleep relatively early (~10 pm) and wake up early (5 am).  This schedule has allowed me to edit the photographs I took while I was in India.  I hope you enjoy these photos:

Science for Monks, Gangtok 2018 Photo Album
Posted by Eric Chudler at 11:47 AM No comments:

As I now sit in the Paris airport, waiting for another flight and watching the sun rise over an Air France plane, I reflect on the first 24 hours of my trip back to Seattle.

So, a car arrived at 9 am in front of the New Castle Hotel in Gangtok, Sikkim, to start the long journey back to Seattle.   Last week, the trip from Bagdogra Airport to Gangtok took about 7 hours by car because we had to take a detour around a landslide that blocked the road.  There was little rain this week, so I did not anticipate any unusual road problems.

The trip between Gangtok and the Bagdogra Airport is one wild ride.  Descending from about 5,500 ft over windy, bumpy roads that are not always paved, dodging goats and sheep, and avoiding head on collisions with other vehicles is a harrowing experience.   I made sure to take a Dramamine tablet before we left.

To complicate matters, the Prime Minister of India was scheduled to arrive at the same airport that I was scheduled to leave from.  His arrival and my departure were less than one hour apart.   He was going to take a helicopter to Gangtok to inaugurate a new airport.  Anyway, the trip from Gangtok to Bagdogra airport took about 5 hours, 2 hours less than it took to get to Gangtok.

Bagdogra airport was chaos.  Inside the terminal was hot, humid and crowded.  First, my flight was delayed by 20 minutes and then it was delayed another 20 minutes.  I was not so concerned with the delay because I had a long layover at the Delhi airport.

Throughout the week I was concerned that I would have trouble entering the international terminal in Delhi.  I knew that security was tight and that they required a boarding pass or ticket just to enter the terminal.  The problem was that Air France did not provide me with an electronic ticket and when I tried to check in online, I was instructed to get my boarding pass at the airport.  Most of my documentation identified me only as “MrEric.”  I anticipated this problem so I used my computer to download the email instructing me to get a boarding pass at the airport.   This email had my full name and ticket information.

It turned out that my computer saved the day.  The security guard would not accept any of my paper documents.  I said I had more evidence.  I turned on my laptop computer and showed the guard the email I had received.  That did the trick and he waved me through.
Posted by Eric Chudler at 10:28 PM 1 comment: 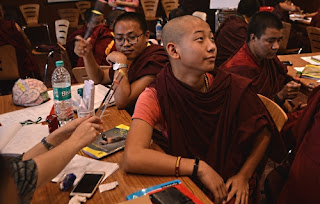 With only one day of teaching left, there was so much material still to cover, but so little time.  I explained to the monks that we had only scratched the surface of neuroscience and that we still had touch, hearing, smell, taste, movement, memory, learning and much more to discuss.  It would be impossible to present everything.  Instead, I said, we will just sample a few topics to finish.

We experimented with sound waves, made a model eardrum, tested our ability to detect sensation on our skin and to localize sound with one versus two ears, observed the taste of candy with and without the sense of smell, and talked about memory and learning and tested our short term memory.  It was a very quick sample of some important concepts that I wanted to introduce to the monks.

At the end of class, I thanked the monks and the Science for Monks program for inviting and hosting me in Sikkim.  I passed around boxes of Washington State-made “applets and cotlets” candies for everyone to share.  The monks presented me with many traditional white scarves as a thank you for teaching.

Then it was time for photos.  First, we took a large group picture and then we took many smaller group pictures.

I hope the monks enjoyed learning about neuroscience; I certainly enjoyed my time teaching with them. 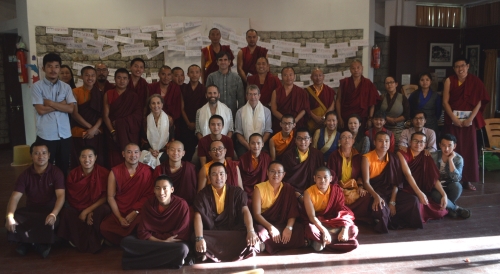 Posted by Eric Chudler at 6:14 PM No comments: